Stan ... Christ-formed through a food box 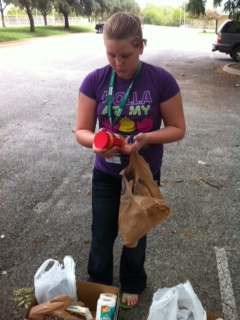 Stan, a middle-aged medical supply rep, had gone to church some as a kid, but had completely separated himself from it in his teens. He says he was burned and disappointed in some of his experiences with church so he washed his hands of it.

But after 40 years of shunning church he experienced this simple church group, and God used it to begin chipping away at his heart. His wife was already participating in the “green” church on the parking lot. She heard about it through her mother’s participation (who heard about it through her garage door repair man). Her sporadic presence soon became regular and she began to tell Stan about the weekly food box, the monthly cash given to persons in crisis, and the outdoorsy environment. He finally came with her on Mother’s Day, but he was careful to remain aloof. Again at Christmas, Stan was with his wife, but he always sat at the edge of the group and just looked away during prayers or worship. He was polite, but distant.

Then he came one Sunday when there was a particularly touching report from the recipients of the food box the week before. He asked if he could deliver the box to an elderly lady on his medical route during the coming week because he knew she was having trouble financially. According to plan, he loaded the box on his truck Monday morning with the intention of dropping it off about midday. But before he left the warehouse, a supervisor brought a new trainee over to ride with Stan and learn the “job”. As they rode together, and got to know each other, the trainee asked about the box of groceries and Stan told him about the green church and how they gave everything away. After a quiet pause, the trainee opened up a little deeper…he said he’d been out of work for several months and things were really tight at home…he asked if Stan thought the church would allow him to have the food box in order to feed his three kids. Stan could barely talk by then but okayed that idea wholeheartedly. Immediately the trainee called his wife, welling up with tears, to tell her what he was bringing home to three hungry mouths!

Stan became a Christ-follower soon after that encounter! Not only was he at the gathering every week, he began to share openly during the Bible time about his own journey. He prayed. He sang. He went out of his way to help people in his path during each day. He served others in the gathering. He shared his encouragement and thoughts in this group with a Christ-like wisdom. He began to talk with his grown children about his new way of life (they had already noticed of course), and they began to show up at the gathering.

This green church always depends on God’s “giftings” and anointing more than on human selection, and in that environment HE raised up Stan as a true “elder” in the group!

Life transformation became a reality for Stan, without anybody saying those words or planning a complex “strategy” of discipleship.

The “green” church just lived it out!