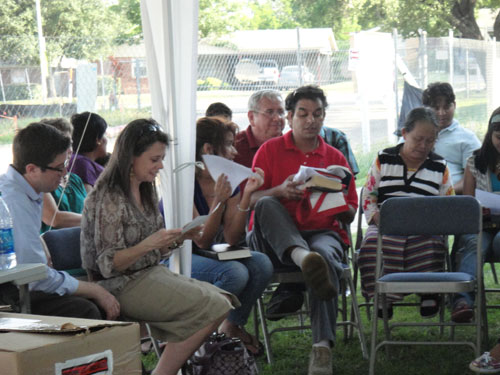 …how would you sharpen this word picture of an Acts 2 church for an unreached cluster of friends?

Chad prayed silently as he walked toward the dorm where he was meeting with about 10 friends. Some were not-yet Christians or not practicing Christians…others were sold-out to Christ! But each one was interested, to a point, in authentic spiritual truth. He actually started this little Tuesday night church by praying that God would guide him to a divine encounter with someone who was interested…and it happened three weeks later when he and a new friend began to talk after a biology lab. That same week a group began meeting in the lab partner’s room. They didn’t break any dorm rules, but just gathered as a little faith group…an on-site Body of Christ!

As soon as guys got there they began comparing their weekly ups and downs while they ate pizza. One guy grabbed a last slice and Chad steered the conversation toward a new CD …”Anybody have this? Listen to the third song, and what it shares about God’s working in our lives.”

After hearing the lyrics about “failures & faith”, one of the freshmen opened up about disappointments in life and how he connected with a phrase in the song…but he still hadn’t made his mind up about God. All agreed…faith is a personal journey that you can’t rush of fake.

Chad gave out copies of John 8 for the group to discuss. At times he offered an insight, but mostly he kept pressing the group to read a paragraph and then dialogue about what it said regarding (1) self, (2) others, (3) living, or (4) God. As they talked, the “woman caught in adultery” sparked several comments on true forgiveness, but Jesus as “the light of the world” left everyone thinking. Chad ended by encouraging everyone to read their favorite verse in the chapter each day during the coming week…to see if it would impact how they lived.

Every gathering concluded by having those present decide how they would give their “offering” to make a difference in the world. They had given it to a homeless person, a missionary, and an inner-city children’s ministry. They didn’t even use a bank account. Everyone just gave cash and different ones took the money to the chosen recipient. Everyone liked to get in on this kind of giving and often the person delivering the gift got further involved. The group ended with sentence prayers for each other, from one side of the room to the other. It was heartfelt, but simple prayer support, and all got included.

During the next seven days, Chad met with the Senior Pastor from his home church (who had originally suggested starting a dorm church to reach students who just weren’t interested in coming to a church building). The mentoring and wise counsel from this experienced Pastor were invaluable. But Chad also hung out individually with the “Dorm Church” guys, or connected with them by phone or email. It was in these private times that he got to know each person, listened to problems, or shared his own faith journey with them.

New people were always showing up at “Dorm Church”, and they always came with someone who wanted them to experience what others had found (1) friends who stood by you and (2) a faith that helped you live everyday differently.

May God’s Spirit guide you and bear fruit!